Alrud has been nominated for Chambers Europe Awards for Excellence 2012 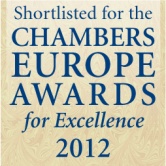 ALRUD became the winner of the Chambers Europe Awards for Excellence in 2010 and Chambers Europe Client Service Award in 2011. The awarding ceremony of 2012 winners will be held on May 10th in Amsterdam.

Chambers Europe Awards for Excellence has been instituted by the English company Chambers and Partners and is presented every single year. Award is assigned to law firms which have shown notable achievements over the past 12 months. The award reflects the excellence of the company in a particular practice, impressive strategic growth and excellence in client service.