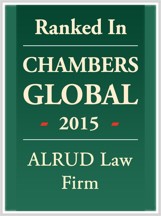 The Chambers and Partners ranking agency has published the new issue of Chambers Global 2015. This year four practices of ALRUD Law Firm are presented in the publication: Corporate law, Tax, Dispute resolution, Restructuring and Insolvency.

The Corporate law practice (Band 3) is recognised by the agency through many years in a row. According to the source, Vassily Rudomino, Senior Partner and key rainmaker of the practice, is highly recognised in the market for his expertise in M&A and corporate matters. He also is noted for his huge experience in competition law.

Head of department Alexander Zharskiy, Partner, take place in Band 3. He advises on M&A, corporate and finance issues with a strong focus on the energy sector. Clients praise his depth of experience: "His broad view means that we get real solutions to the problems."

Newly ranked Anton Dzhuplin, Partner, is noted by ranking as «Up and coming». The clients describe him as a "detail and goal-oriented lawyer". His focus includes M&A, joint venture, finance and regulatory matters. He assisted Valenta Pharmaceuticals with establishing a joint venture in Germany.

The Restructuring and Insolvency practice (Band 3) is also presented in the ranking for several years.

The Chambers guide notes the firms’ Dispute Resolution practice (Band 4) for the first time. Head of the practice Feodor Vyacheslavov, Partner, is widely appreciated by the clients for his dedication to cases, creative approach and excellent presentation skills. "I use him when I need an orator," one client reports. Feodor Vyacheslavov appears in the ranking in Band 4.

The Tax practice (Band 4) leaded by Maxim Alekseyev, Senior Partner, appeared in the ranking for the first time as well. The team of the practice represents clients in tax disputes, as well as handling debt and corporate restructuring matters.